Real Pension Calculation Formula | Why You Will Get Less PF Pension 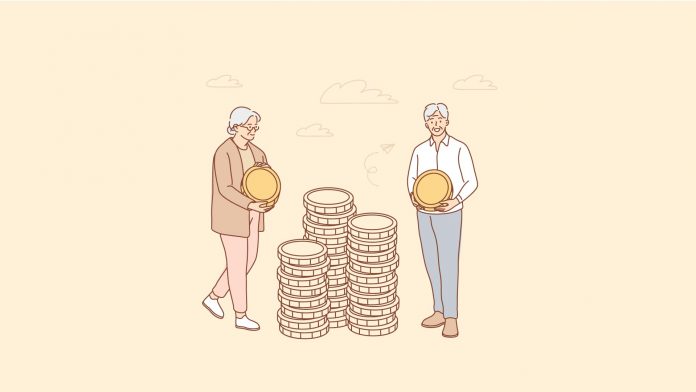 Pension members believe that they will at least receive the full amount they have contributed towards pension upon withdrawal. But that is often not the case. We see many members who get substantially less pension withdrawal than what they had originally thought it to be. This is because pension calculation works in a different and convoluted way. This article emphasizes on the important pension withdrawal rules and calculations, some common mistakes which HRs may make leading you to get less pension and steps to get your actual pension amount from the PF department.

Employee Pension Scheme (EPS) is one of the three schemes under the PF Act. The other two being Employee Provident Fund (EPF) and EDLI. Under EPS if a member contributes for more than 10 years (or 9 year 6 months) then he is eligible for a monthly pension. Moreover, Pension is also provided to members in case of disablement due to work related injury. Dependent pension is also given to widow/children or nominee of the member or pensioner.

A PF passbook generally shows three columns of contributions – PF employee share, PF employer share and Pension contribution. PF members who are eligible for pension get 8.33% of their PF contribution sent to Pension. If a member’s total pensionable service is of 10 years minimum then he is eligible for a monthly pension after he turns 58 years of age. Alternatively, he can also opt for reduced early pension at the age of 50 years. But he cannot opt for pension withdrawal.

However, if a member’s total pensionable service is less than 10 years then he can close his pension account two months after retirement or on leaving the job and withdraw his pension amount altogether. This is also called Return of Contribution since a member gets almost the amount that he has contributed towards pension during service. But the pension amount a member receives upon withdrawal is never the number given in the PF passbook.

Since 1st September 2014, the government has put a cap on the EPS contribution of members. Members cannot contribute more than 8.33% of Rs 15,000 which is Rs 1,250 towards their pension fund. Hence, unless a member explicitly informed the PF Department that they want to contribute on their full wages before this law came into place, they cannot pay pension on their full wages. They have to contribute no higher than Rs 1250. If your PF passbook shows more than Rs 1250 being contributed towards pension then that is incorrect and you should get it rectified.

No interest on pension contribution

No TDS deduction on pension

Pension withdrawal calculation amount is never the same as the amount given in the PF passbook. The pension is received according to EPS Act 1995, Table D. This is calculated as follows.

If a member’s overall pensionable service is under 10 years then he can close his pension account and take full withdrawal two months after leaving the job or retirement. Additionally, if a member’s age is 58 years and has less than 10 years pensionable service then although he is not eligible for a monthly pension, he can opt for full pension corpus withdrawal and have his pension contribution post 58 years transferred to his PF account. The pension account though will be closed after 58 years of age.

Moreover, if the total service period for any member is below 6 months, then as per the round-off rule this is calculated as 0 years and the member is not eligible for any pension withdrawal amount.

Similarly, using the same rule, for service period of 9 years and 6 or more months but under exact 10 years, it is rounded off to 10 full years. Hence, the member becomes eligible for monthly pension and will not be allowed any pension withdrawal.

But the pensionable wage here is the wage at job exit.

PF members who joined before September 2014 and have less than 10 years of service period will need to use the weighted average method to calculate their PF withdrawal amount. As per the pro-rata rule, whenever ceiling wage is changed, members need to take the weighted average until then.

Multiply weighted average with factor of 8 = 8.22

Which is definitely wrong, as per earlier rules given.

How to get the difference in pension amount?

Calculation of pension for all members joining after 1995 is on the basis of Paragraph 12 of the EPS Scheme. This paragraph states that, in the case of a new entrant, the amount of monthly superannuation pension or early pension, as the case maybe, shall be computed in accordance with the following factors, namely:

But this formula is applicable on the following conditions given in Paragraph 12:

How is pensionable salary determined?

How is pensionable service determined?

But, this will not be the actual pension amount because of the pro-rata rules.

What is the pro-rata rule?

Additionally, if the Date of Joining for an employee is before 16th November 1995, then some contribution from the Family Pension Scheme is also added to the pension calculation. This is calculated on the basis of Table 12 (3)(B) and Table B from the EPS. This value is generally Rs 500.

Members need to obtain their PPO form by visiting the Pensioner’s portal and inputting their details. Then they can download their PPO Form.

Members need to check the following on the PPO enquiry form:

The claims complete in all respects submitted along with the requisite documents shall be settled and the benefit amount paid to the beneficiaries within 20 days from the date of its receipt by the PF Commissioner. If there is any deficiency in the claim, the same shall be recorded in writing and communicated to the applicant within 20 days from the date of receipt of such application. In case the Commissioner fails without sufficient cause to settle a claim complete in all respects within 20 days, the Commissioner shall be liable for the delay beyond the said period and penal interest at the rate of 12% p.a. may be charged on the benefit amount and the same may be deducted from the salary of the Commissioner.

A member who has attained the age of 58 years and is otherwise eligible for pension under clause (a) of sub-paragraph (1), if he so desires may be allowed to defer the age of drawing pension later than 58 years but not beyond 60 years of age.

In such cases as is referred to in clause (a) – the amount of pension shall be increased at the rate of 4% for every completed year after the age of 58 years which shall be restricted to the wage ceiling given under the proviso to subparagraph (2) of paragraph (3).

However, it takes upto 25 years to break even the 2 years of pension foregone when a member actually starts getting pension. Hence, this option is not advisable.

A member if he so desires may be allowed to draw an early pension from a date earlier than 58 years of age but not earlier than 50 years of age. In such cases, the amount of pension shall be reduced at the rate of 4% for every year the age falls short of 58 years.

But early pension is always a better option then deferred pension, since in this case you get the pension for 8 years whereas you don’t get anything in the latter option.

Pension in case of death

In the case of the death of the member, four scenarios may occur as follows:

If a member passes away before completion of 10 years of service period, then technically he does not qualify for pension. But if member’s service falls under Grace Period, which means that member does not withdraw pension fund after leaving job and passes away within 36 months after leaving job, then he is considered as an active pension member. Hence member death while in service or within 36 months after job exit is called the grace period.

If a member passes away before 10 year service period completion and 36 months after leaving job, then he does not get any pension. Member will only be able to withdraw EPF funds.

If member passes away after completing 10 years service period and/or after exiting job then he is eligible for member pension. In this case, the date of expiring will be considered as the date of retirement for the member’s pension. Minimum pension can be Rs 1000 per month.

If member’s pension has begun, be it retirement pension, deferred pension, or early pension, and he passes away then his widow is eligible for 50% of member pension.

Pension in case of disablement

In the case of disablement of the member, three scenarios may occur as follows:

If member has already completed a service period of 10 years at the time of disablement then he is eligible for member pension.

In this case, check Table C of EPS to find out the amount of monthly pension member is eligible for.

The member can get Rs 1000 per month as pension for disability.

Out of these three scenarios, member will receive whichever option gives the maximum pension return for disablement.

Under the pension scheme, in case of a member’s passing, his family continues to get his pension benefits. The “family” for a male member is described as his wife and two children. Similarly, the “family” for a female member is described as her husband and two children. Following scenarios explain which family member gets how much pension in case of member’s death.

Hence it is always recommended to file your PF nomination form.

Bytes
India is rapidly adopting many changes to pace up the Gross Domestic Product (GDP) and environment of the nation. The Government as well as...

Why is Dubai land of duty free gold?